Sent to us from W. David Griggs of Alcolu, South Carolina; this recipe is dedicated to Boots Varner (“made my first hash under his hand”).

“You can cook the butt along with your hog, or add it, liver, potato, and onion to a pot and just cover with water, simmer for 30 minutes. Drain and cool.

Run all through a meat grinder. Add remaining ingredients and simmer 1 hr or till thickened and cooked through, stirring often. Thin with water. Should be the consistency of thick spaghetti sauce – one good spoonful should cover your serving of rice completely without dripping onto the plate – mmmm”.

Slice rolls in half lengthwise. Top bottom half of roll with 3 slices of Canadian Style Bacon, a cheese slice, 2 tomato slices, 3 pickle slices, lettuce and the top half of roll which has been spread with mayonnaise.

The mystery of how to grill a London Broil and maintain a fair amount of tenderness has been discovered!

London Broil although quite delicious is often difficult to grill successfully. The secret is in a powder packet product called – “Lawry’s Tenderizing Beef Marinade”, this can usually be purchased at most super markets. Follow the instructions carefully. It is especially important to tenderize each side for no more than 15 minutes. The tenderizing agent can make the surface jellied and too “tender”.

Combine the packet contents with 2/3 cup water, add a portion of beer or dry sherry for an elegant whisp of old world meat stew flavor.

GRILLING TIP :
The next step is to boost the flavor of the powder packet even further by seasoning the cut just before you lay it on the grill.

First side: Sprinkle with a liberal amount of Onion Powder. Top with Italian seasoning and place on the grill.

Turn the London Broil at anywhere from 5 minutes (for a hot grill) to 10 minutes (medium hot grill).

Use your own judgment on cooking times. Better yet, use a meat thermometer. Final temp should be above 145 degrees (Fahrenheit).

Second side: Lay on the Garlic Powder, and then grind on a good quantity of fresh ground Pepper.

At 5 minutes check your temperature, and remove when done (might need another 5-10 minutes) medium rare done should be above 145 degrees in the center or fattest portion.

Slice diagonally (against the grain of the meat) after about a 5-10 minute cool down (covered with foil or a plate).

That London Broil should be as tender as a rare prime rib and twice as tasty.

This is one wrap that won’t bore you. Tangy Canadian style back enhances the flavor base.

Heat beans in a casserole dish. Soak the tortillas in the beans for about 30 seconds. Remove with tongs and place on a flat plate. Top with a thin layer of Rose Canadian Style Bacon and roll up.

Repeat for as many rolls as you would like to make. Add more beans on top of the rolls and cover with a layer of shredded cheese and another layer of tomato sauce. Serve as is.

Attributed to: Rose Packing Company, makers of Rose Canadian Style Bacon. Check them out for more great recipes at www.rosepacking.com

This one was a special treat, enjoyed on an unusually sunny day in South San Francisco at the home of David Lake. Dave as you probably all know is the Northern California Meco Superstar, preferring to cook on a gift box shaped Meco with one of those “adjustable height grills” on it.

Now its real simple to prepare. Just coat the cut of meat with the Teriyaki sauce, so it is nicely glazed. Wait a few minutes, for a slight absorption of the sauce. Then coat evenly on both sides with onion and garlic powder. Wait a few minutes once again, for the powders to soak into the Teriyaki. Liberally shake on the seasoned pepper and load on the pizza seasoning, at least until it starts to fall off the sides. Cover in a glass dish and marinate over night.

Prepare your smoker early in the morning. Soak the wood chips and prepare your water pan per your usual routine. If you like, add beer or wine to your water pan. I used a 40 ouncer of Miller High Life (because it is a very aromatic beer), and Dave threw in some old red wine (wine that he couldn’t trick his friend’s wives and girlfriends into drinking). I also chopped up a large yellow onion. The total cooking time for the cut was about 6 hours to bring it to 160 for medium or to 170 degrees for well done, a tender pink middle and slightly dry tips and outer top showed me it was ready.

This recipe comes from the “Meco Barbecue and Smoker Cookbook” which you can order with the order form that comes with any Meco Grill or Smoker. It is copyrighted 1993 by Oxmoor House, Inc.’s Book Division of Southern Progress Corporation so I basically, could get in trouble for reprinting it here.

Wait a minute, I did make a few changes to it, to make it sweeter and more garlicky, so maybe my artistic cooking license will protect me! On with the recipe.

Slap that big boy into a large zip-top bag or an oven bag. Mix up all the above ingredients, stirring well until the mustard dissolves. Pour it all into that bag. Seal it tight and refrigerate it four 8-12 hours in a shallow glass container. Turn that bag every time you go to the fridge for a “cold refreshing beverage”.

Remove the brisket from the marinate. Save the marinade in a glass container. Place the brisket on a drying rack while you prepare the coals for the covered grill.

I laid it on a smaller 30lb Weber and seared it over medium to hot coals for about five minutes per side. Once the whole brisket was a golden red. I covered it with the grill cover and cooked it evenly on both sides for 15 minutes per side. Then, I Took it off the grill and placed it in a heavy duty aluminum foil barge (like a boat only bigger wider and flatter too), Leaving room on all sides for the reserved marinade. I poured the marinade on, sealed it up tight, l slit the top about one inch (so I could add more marinade later), but closed the hole tightly until adding more marinade was required (check it for leaks and drying at one hour). Two hours later that brisket was done to tender perfection.

SIDE DISHES: Sticky round rice (not the long grain but the rounder football shaped grain rice) and a Caesar Salad, hit the spot so well, my dinner guests and I could barely speak. We just sat there in my living room, everyone grinning from ear to ear. But you know something. I kept hearing the same thing as if I could read their minds. They just kept saying, “mmmm, cooked in its own juices” (with a little help from that wonderful Denton pineapple molasses based marinade).

This is a very special rib recipe I garnered in my tenure in South Carolina, although I have a tendency to believe that the origins of this recipe are from the environs around New Orleans.

It doesn’t get much easier than this for beef ribs. Add all the ingredients together in a none reactive container. I prefer a glass mixing bowl with a glass lid.

Mix the ingredients thoroughly. Add the ribs, coat and make sure they are submerged. I am prone to place a half slice between each pair of beef ribs. This allows even greater flavor absorption to the surface area of individual pieces.

Set the glass dish in the fridge and marinate over night (or longer).

“Here’s a recipe I’ve done a few times that you need to try. It’s for porterhouse steaks, but you can also do it with t-bones. With great success, I might add. 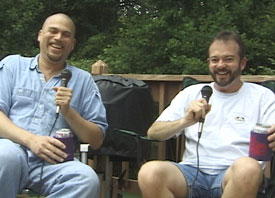 Best thing is it calls for regular stuff, not all those weird spices that no one has. It’s a rub call Well Rubbed Porterhouse”

Combine everything and rub 2 tablespoons on both sides. Wrap up and refrigerate overnight.

“The Quick and the Flavorful” coming this summer to a bowl of roasted potatoes near you.

Spread evenly on a baking sheet. Bake at 400 degrees F for 45 minutes or until potatoes are tender and crispy. Garnish with parsley.

I have always been a great fan of Rose brand Canadian Style Bacon due to it’s perfect thickness of slice. Also, because it has a wonderful balance of smoke and sweetness.

Preheat oil in skillet at low flame. Mix all ingredients in a bowl. Pour the blend in the skillet making a thin layer. After a couple of minutes, when the omelette starts browning on the bottom, visually divide it in three vertical parts and fold up the outer sections.

Flip it over and wait until the other side browns slightly. Server on a flat plate.

Goes well with (optional):Top with home made tomato sauce (tomato, onion, salt and some oregano, all blended and cooked with oil).